At the Global Tiger Summit 2010 in the Russian St. Petersburg, all 13 tiger range countries set the ambitious animal protection goal of doubling the number of tigers by the year 2022. 2010 was the last “Year of the Tiger” based on the Chinese calendar, 2022 will be the next. The number of tigers in 2010 was estimated at 3,200 worldwide; currently there are fewer than 4,000 living in the wild. Current tiger population numbers indicate that the correct measures were set to achieve that goal, however that much must still be achieved.

Especially in many countries in Southeast Asia, the status is concerning. New studies that were published early in 2019 at a tiger conference in New Delhi show that tiger populations in Southeast Asia states continue to decrease or that reliable figures are simply missing. In Malaysia there appear to be fewer than 200 tigers (in earlier census taking, numbers were estimated at up to 340), in Cambodia no tiger has been spotted since 2007, and in Vietnam the species is understood as extinct. Even though these countries agreed to double the number of tigers and to prevent them from going extinct, the destruction of habitat, poaching, and illegal trade of tigers remain dramatically unchecked.

There is however encouraging news from countries such as Nepal, in which the 121 remaining tigers have nearly doubled since 2009, or India where nearly 3,000 animals, the significantly greatest number of all tiger range countries, live in their natural habitat. Also in Myanmar, where tigers were nearly extinct, there is a small population of 22 that could potentially serve to bring back tigers. Through the construction of a ranger station, financed by the A World for Tigers Foundation in 2017, and deployment of conservation rangers, the tiger population is protected in this region in order to ensure tigers’ survival and repopulation. It is important also to emphasize successes in Thailand, where with nearly 200 Indochinese tigers and the continuous deployment of rangers in many regions, numbers remain stable.

These countries are all characterized by collaboration between governments, environmental protection organizations and local human populations. Recent numbers confirm that successful tiger protection is only to be achieved through deliberate implementation of protective measures and such close partnerships.

Wonderful new developments are also reported from our tiger project in Mae Wong and Khlong Lan National Parks in Thailand. There are again new tiger cubs! Remote camera traps positioned in the national parks have detected a mother with her 3 healthy, energetic cubs. The mother, also known as F5, lives in a part of the national parks with a relatively high density of prey.  Filmed similarly in 2014 and 2016, F5 was observed with 3 cubs each and has one of the highest reproductive rates. This example is encouraging because with only 200 remaining animals in the region, each cub is valuable. It also confirms the correlation of reproductive rate with high prey density, as proven also in other regions. 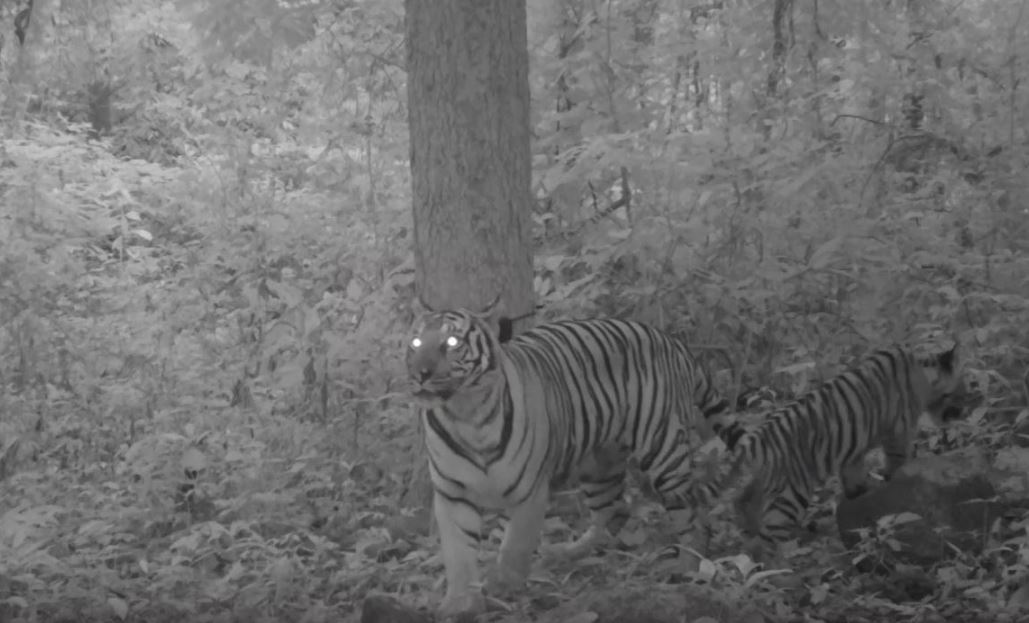 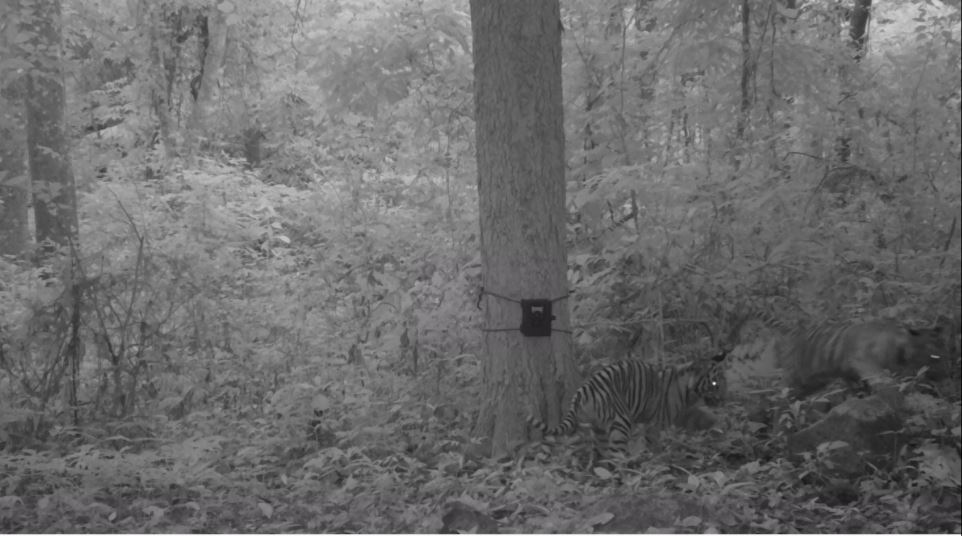 Tigress F5 with a cub (left) and two further cubs (right) (© DNP and WWF Thailand).
By cllicking on the pictures the camera trap videos are started.

Despite this encouraging news, the current tiger census indicates that no significant growth is identifiable in the total tiger population in the national parks. Based on too little prey, not all females are reproducing steadily and the death rate of cubs at 50% remains very high as they have not yet developed effective hunting abilities. The main prey for tigers naturally occurring in our project regions include gaur (the world’s largest bovine), sambar (large deer) wild boars and muntjak (small deer). Preferred are the sambar (weigh approximately 180 kg) because a tiger can live off of one kill for a week. Low numbers of prey can be traced back to commercial poaching in previous years, in which “bush meal” was sold to local restaurants as a delicacy for tourists. To counter this, rangers are now protecting not only tigers but also their prey. These measures are having success, and the decrease in numbers of prey has stopped: current metrics of gaur and sambar indicate that the populations are now stable. In order to secure increased prey numbers and subsequently faster growth rates in tiger populations, a second important measure must be implemented: in focused release programs of prey, sambar must be set free into the wild from protected areas in which these animals are raised, to restore the ecological balance. 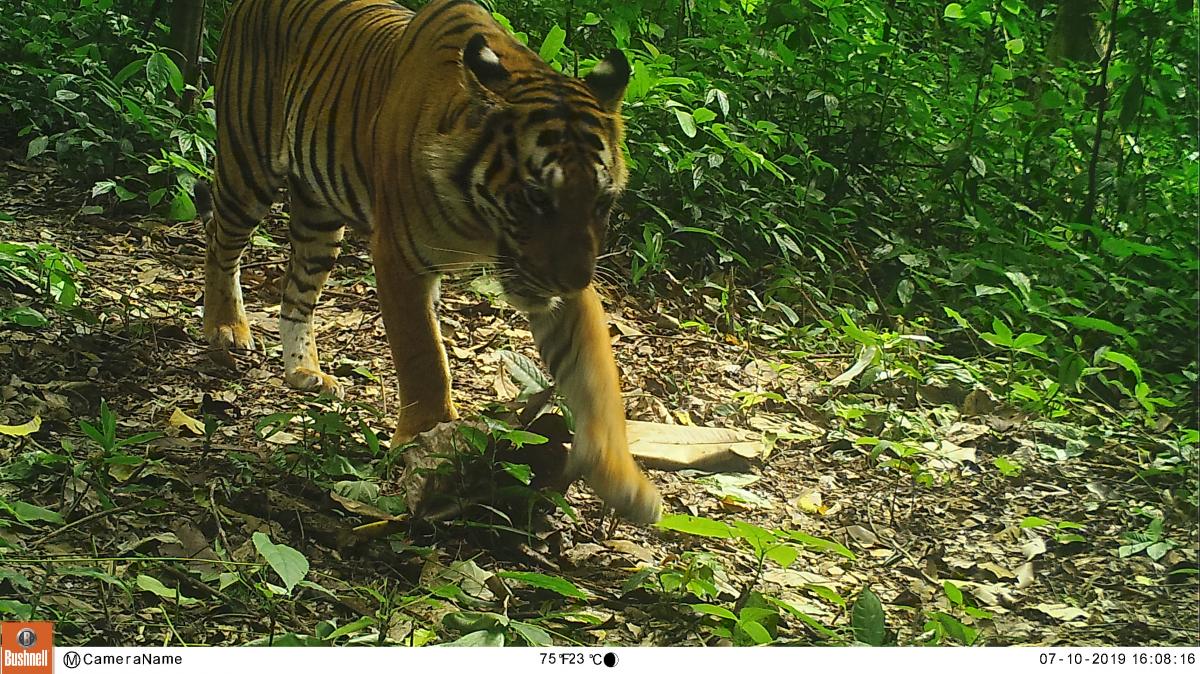 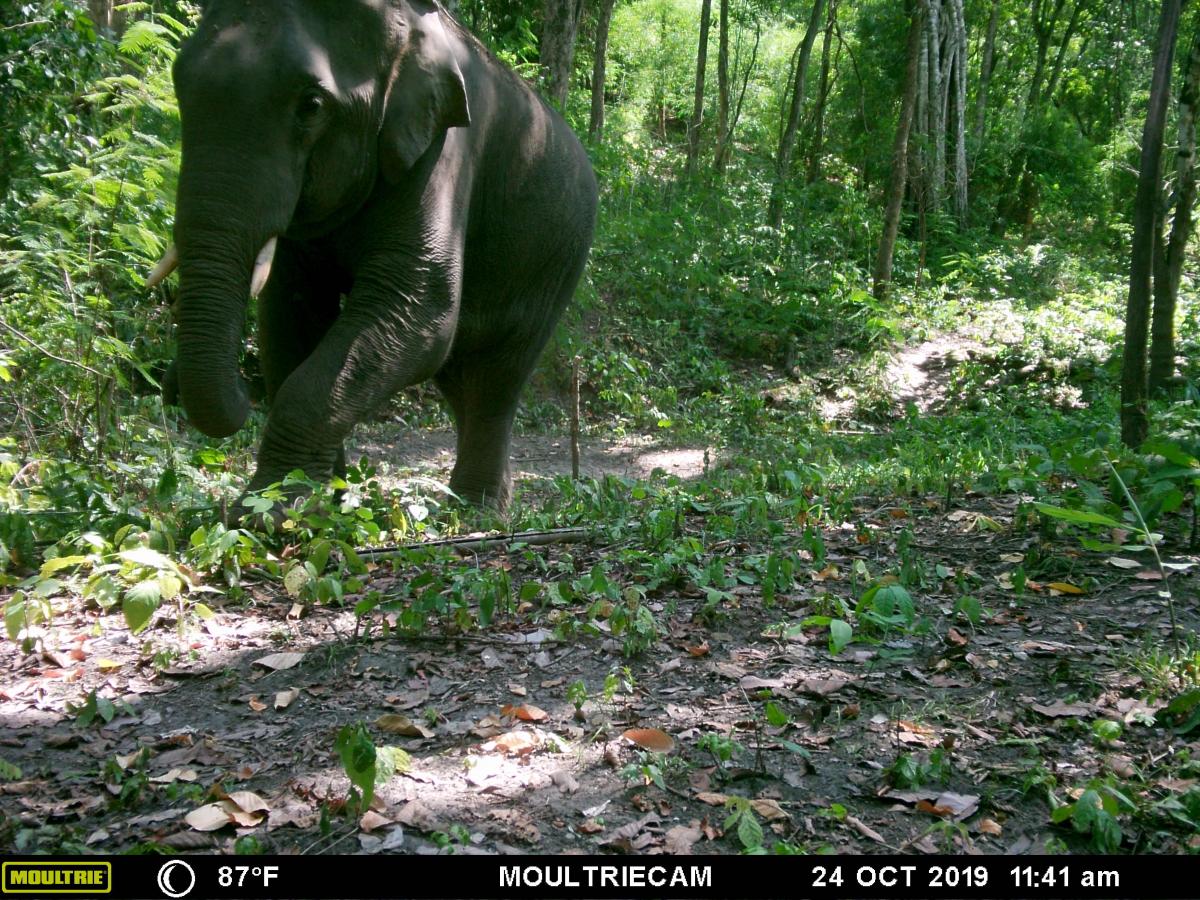 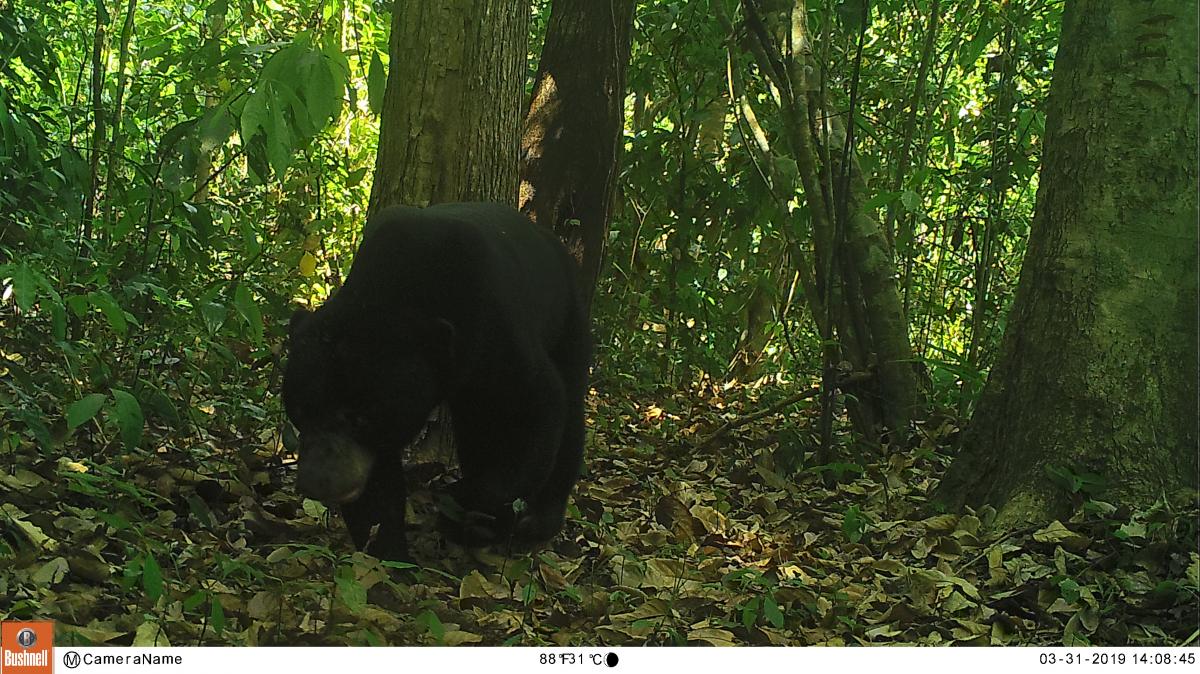 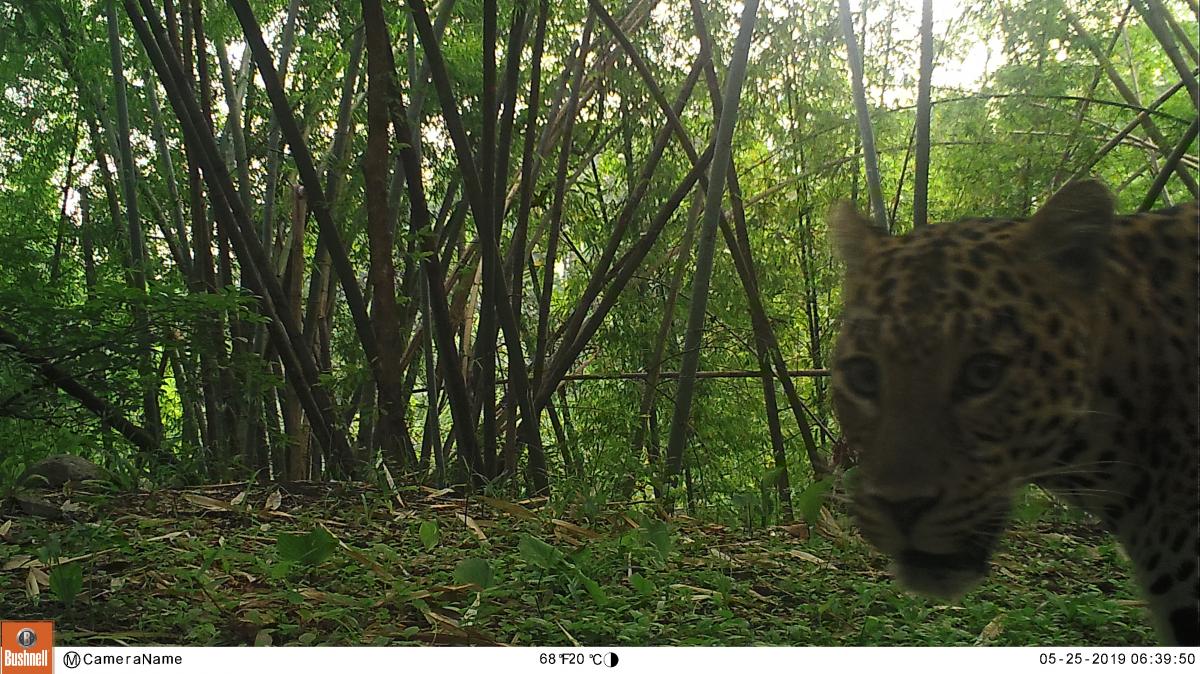 Camera trap photos: Tiger (by clicking on the picture a cameratrap video is started), elephant, bear and leopard. All photos were taken in the National Parks in 2019. (© DNP & WWF Thailand)

Overall, five regions in the National Parks with the lowest density of sambar were chosen for setting these animals free. In order to achieve that all resident females regularly give birth to 2-3 cubs, approximately 1,000 sambar must be set free (approximately 200 sambar per selected region). This number is not only sufficient to secure a higher tiger reproductive and survival rate, it also provides for a stabilization in the number of sambars. In cooperation with local officials from the National Parks, the Department of National Parks (DNP), 40 animals will be set free in a "soft release" already begin of 2020. "Soft release" means that the animals will first be brought to a fenced area in the national park where they will be fed until after approximately 8 weeks they will be released into the wild. The goal is incrementally to release the designated number of prey within the next 3 years.

Continuous Protection of the Tigers by Park Rangers

In addition to the important projects improving prey habitat and release, protection of tigers through rangers again was one of the main focal points of our tiger protection project this year. On their patrols, rangers oversaw approximately 63% of the 890 km² (~350 mi²) Mae Wong National Park and approximately 86% of the 300 km² (115 mi²) Khlong Lan National Park. As in previous years, the strong ranger presence ensured that no tiger was killed and that the number of other killed animals continues to decrease. Also the number of illegal camps in the forests and capture of poachers is decreasing: only two poachers were taken into custody, and remains of a poached bear were found. 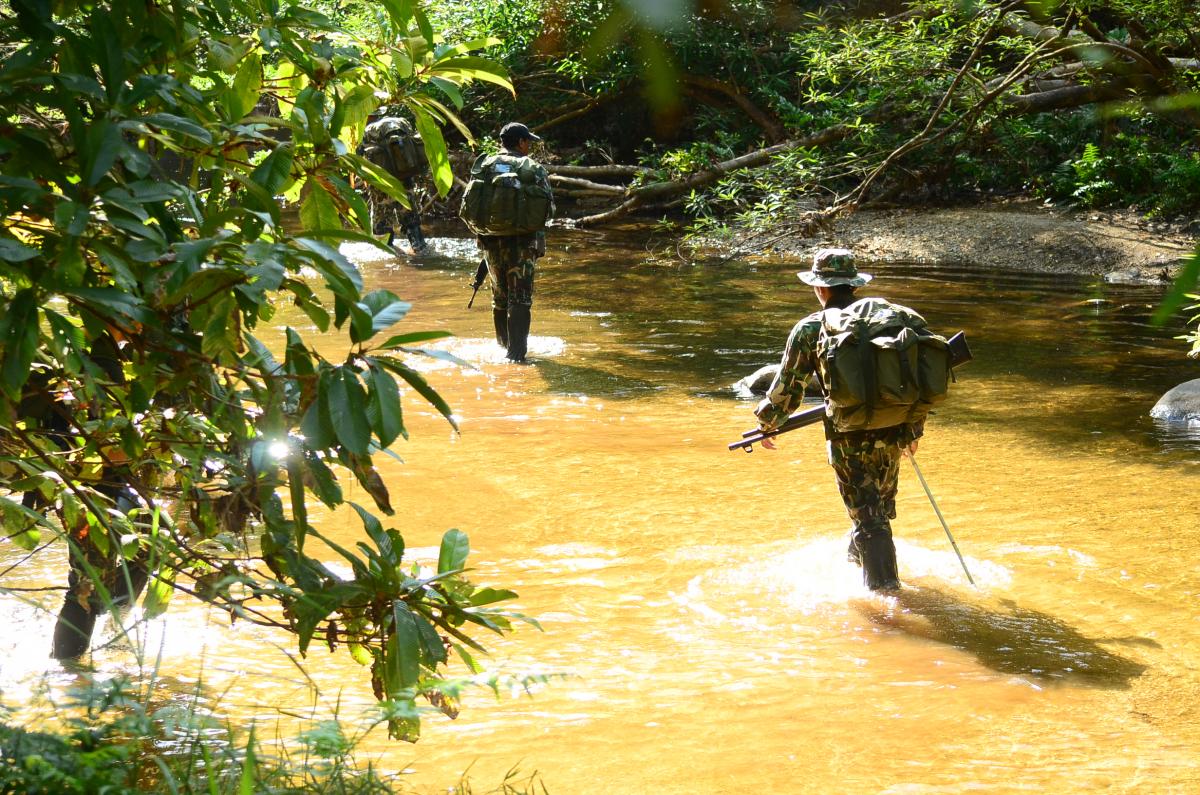 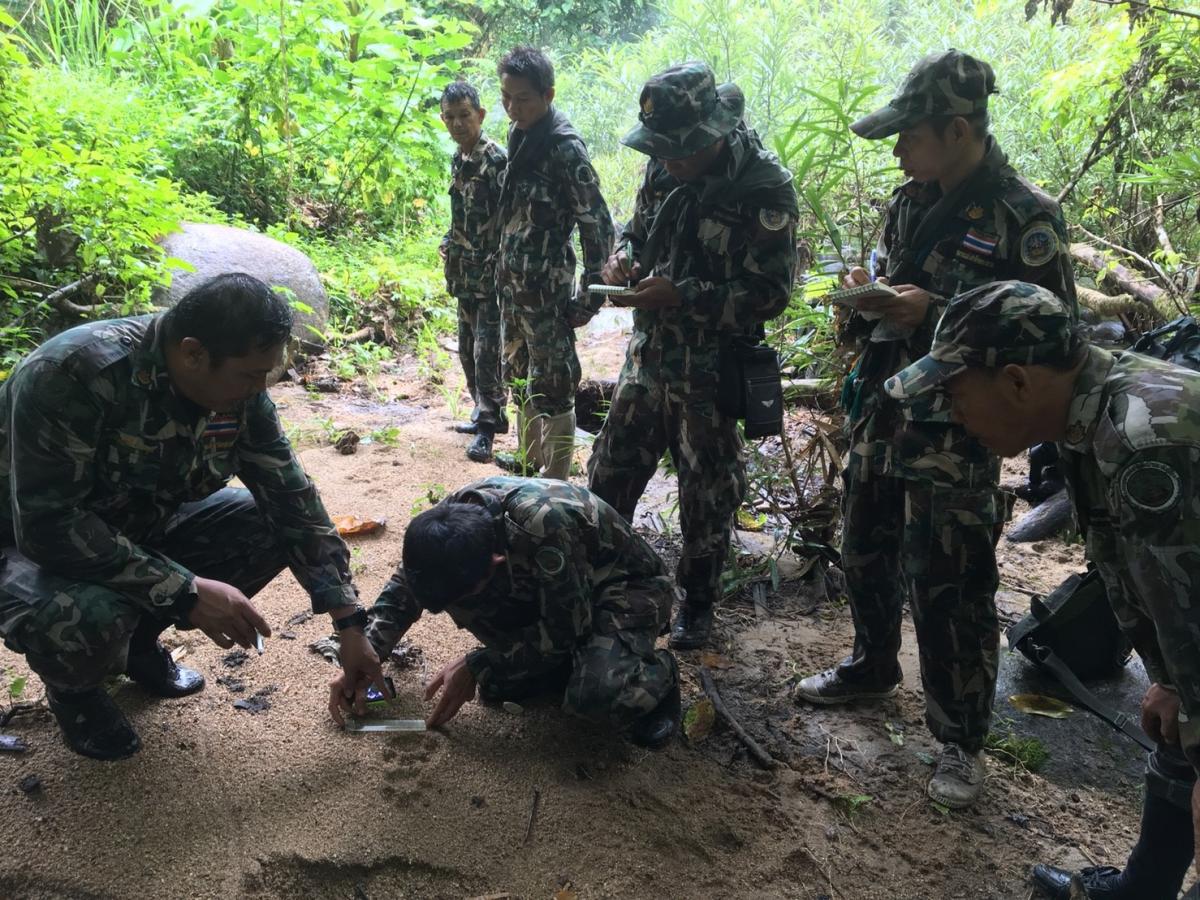 Patrol through the jungle: in the right photo, fresh tiger tracks are measured. 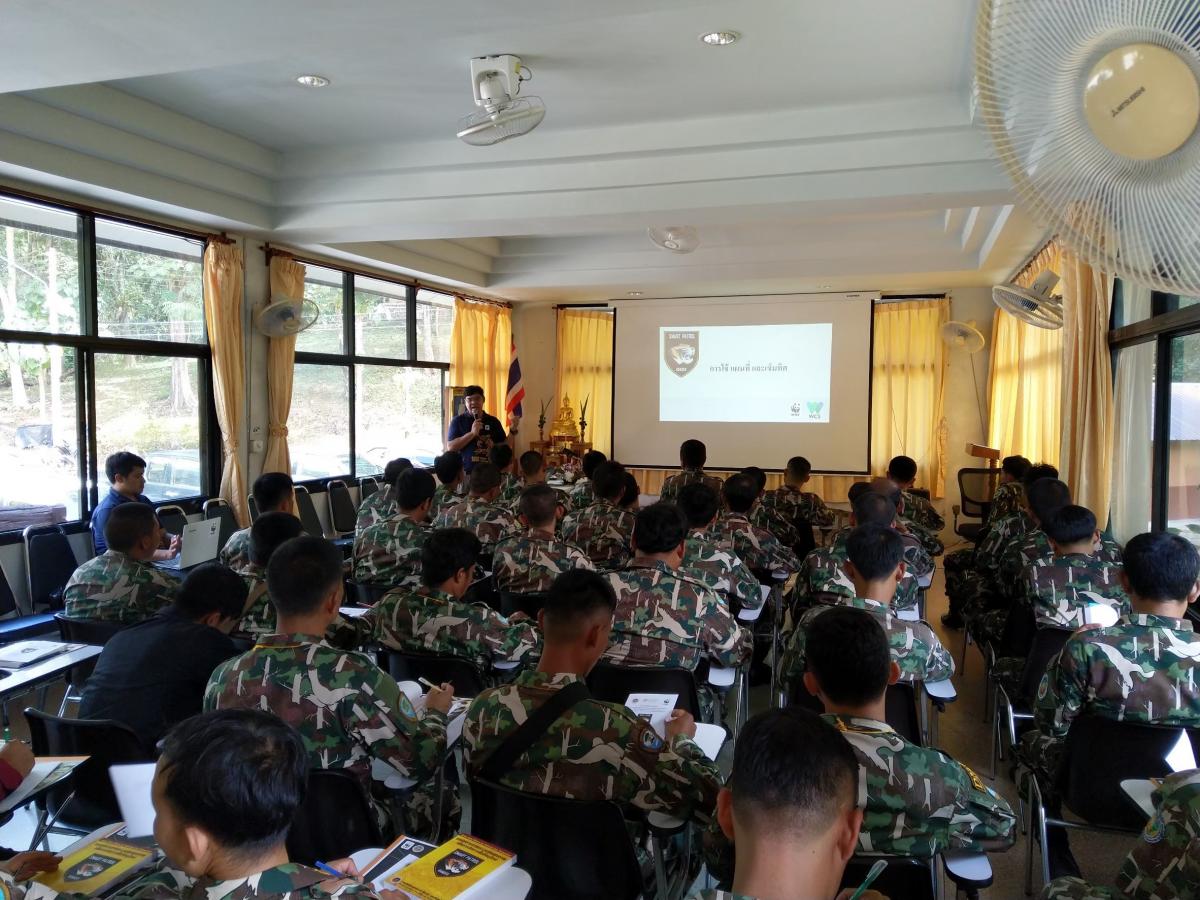 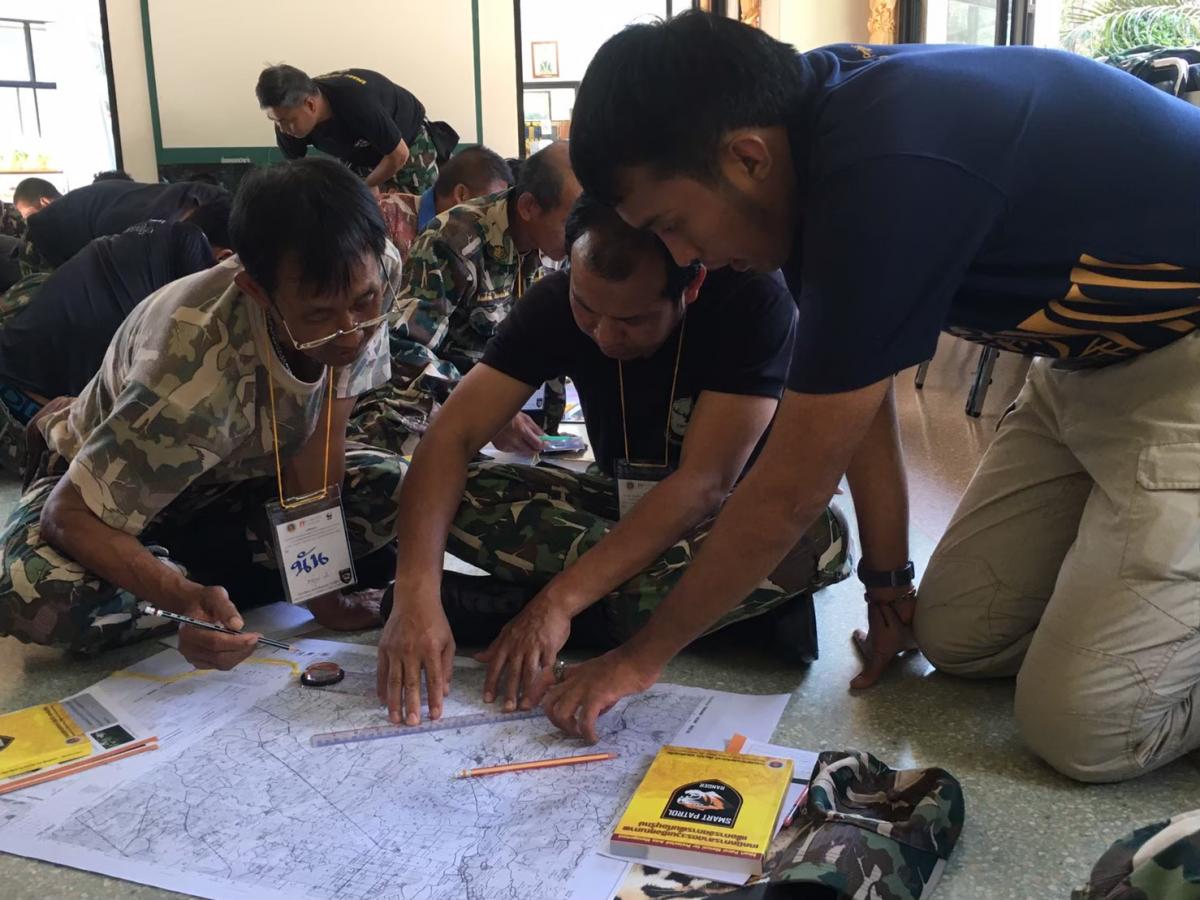 Rangers at a training camp. 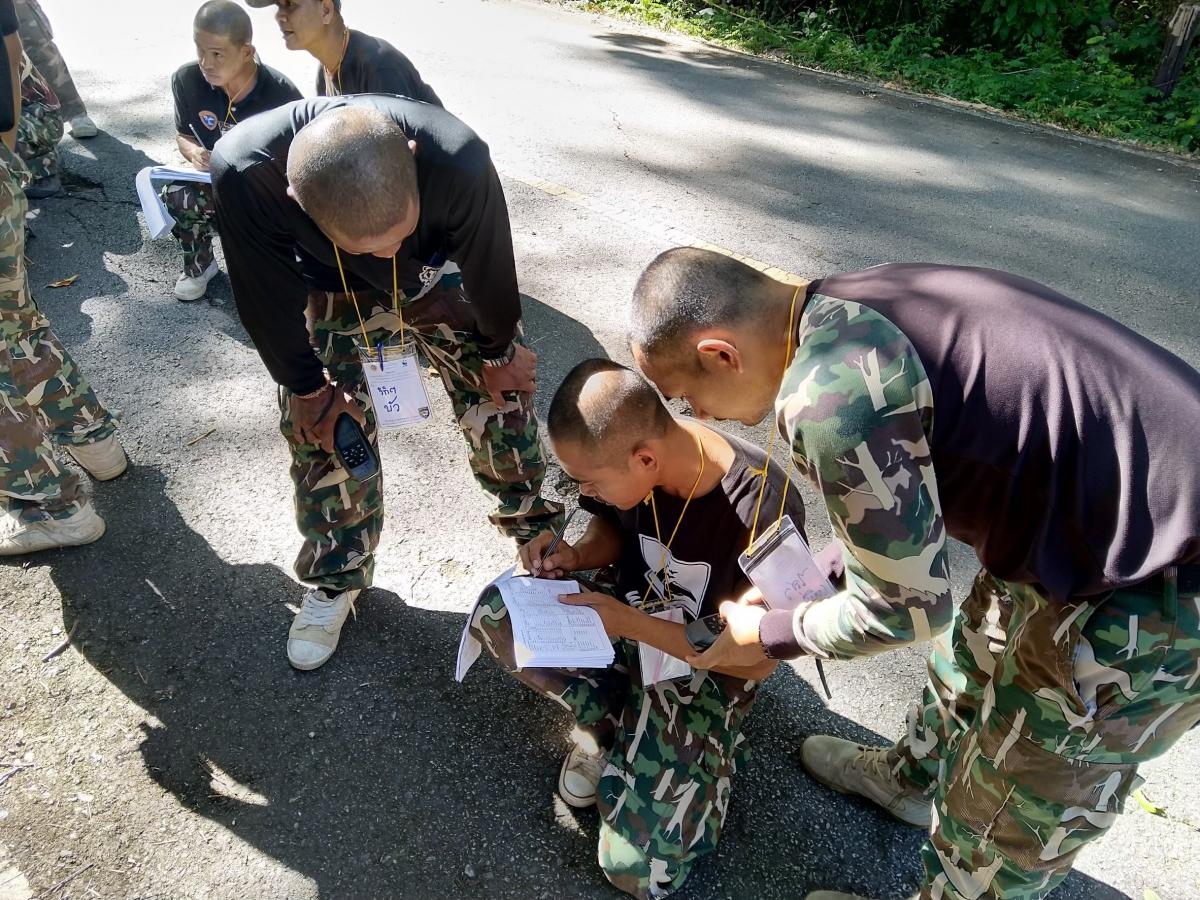 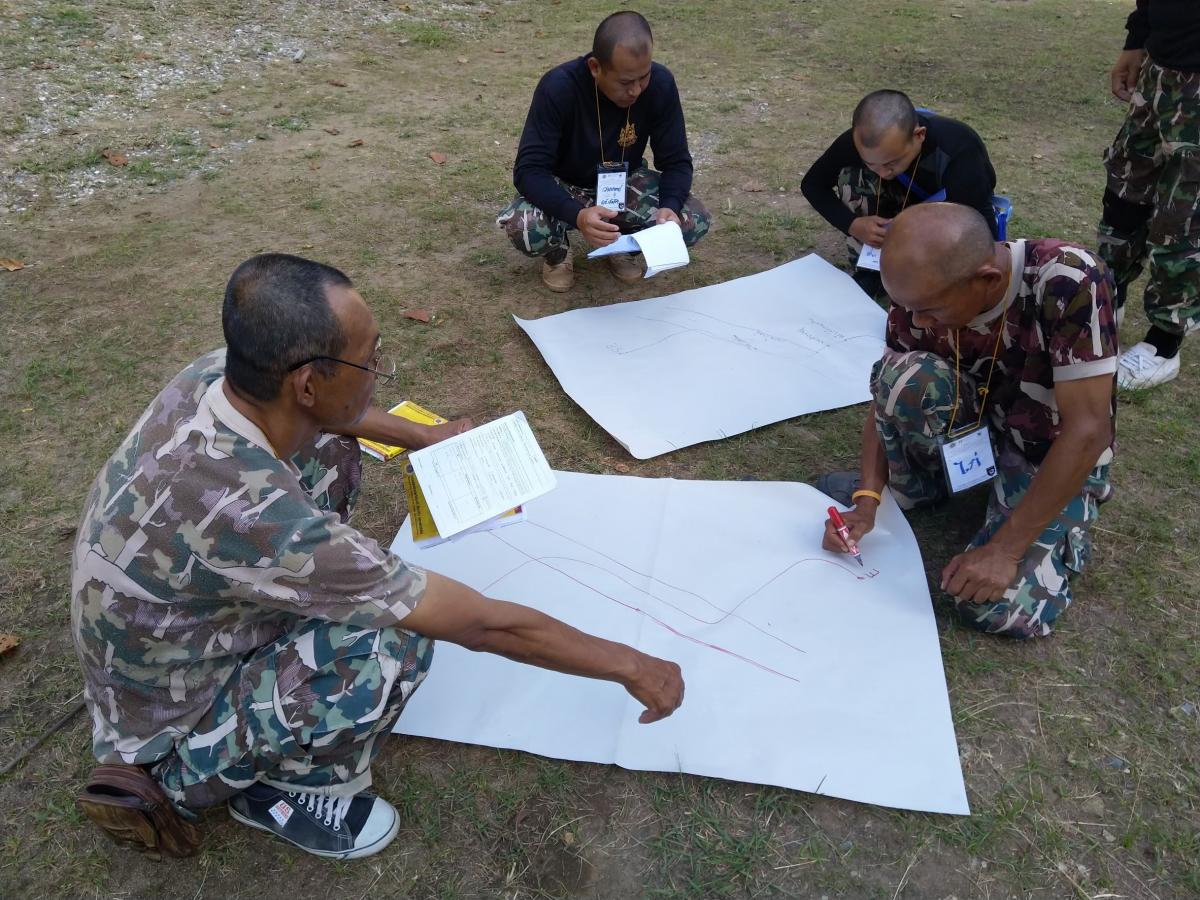 As part of this year’s awareness campaigns, training camps were organized for schools and high schools as well as events for the local populace. For students of the Faculty of Forestry, Kasetsart University, three 1-week SMART patrol training courses were held in January, February, and June. In these courses, 100 students acquired fundamental knowledge toward sustaining intact ecosystems. In the period between January to June, many events were organized in which approximately 1,000 students from local schools were taught the importance of environmental and animal protection emphasizing the protection of tigers.

A final, important element of the annual awareness campaigns is the collaboration with teachers of resident schools, who in the name of the Thai government support the program “Study less -Learn more.” This program seeks to impart important knowledge to school-students by means of activities and projects outside the classroom. In March, 35 teachers from 18 schools took part in a 3-day workshop in which they learned the most effective methods for protecting tigers and their habitat. These workshops serve to integrate knowledge into the schools’ curricula and thereby transfer it to the students. The workshops also offer teachers the possibility to become part of the tiger protection network and to coordinate planning with representatives from other schools for projects protecting endangered species and their habitats. 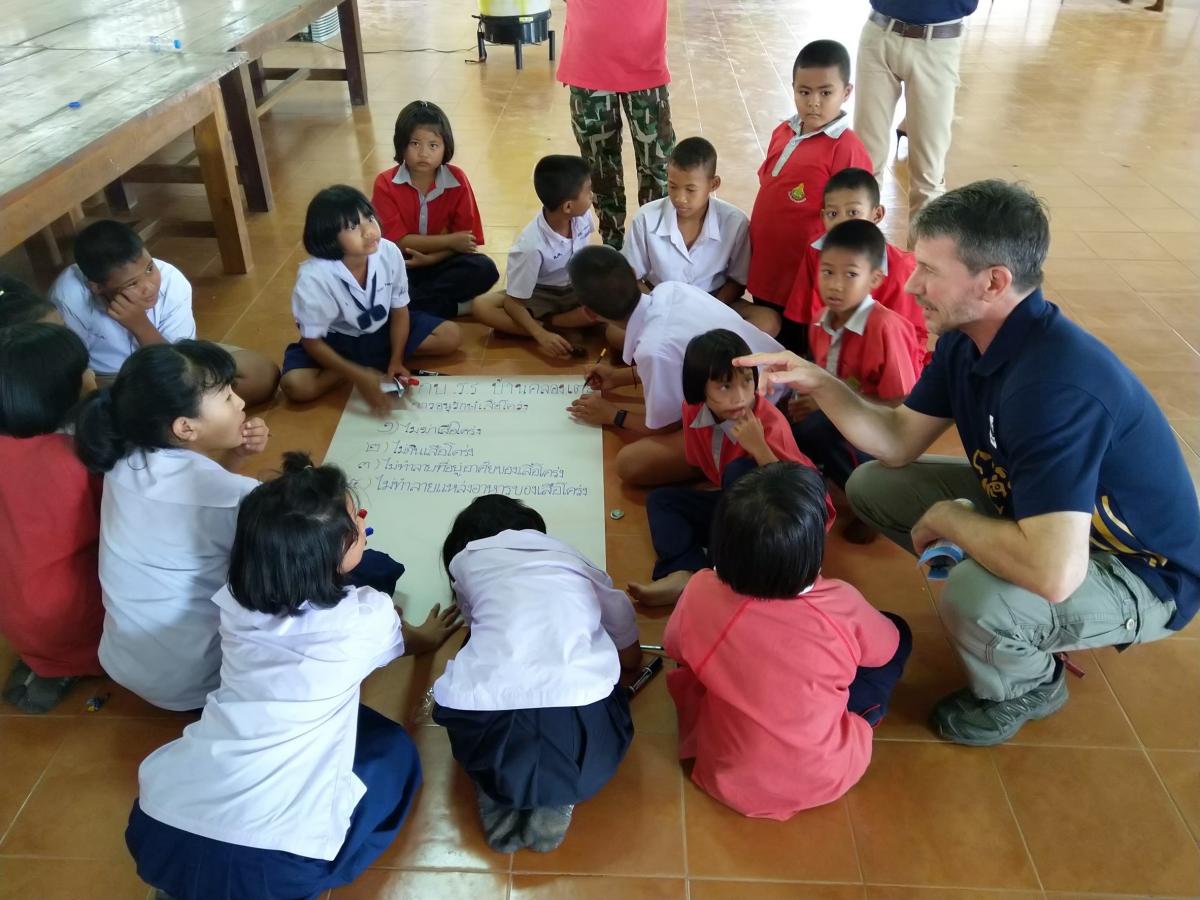 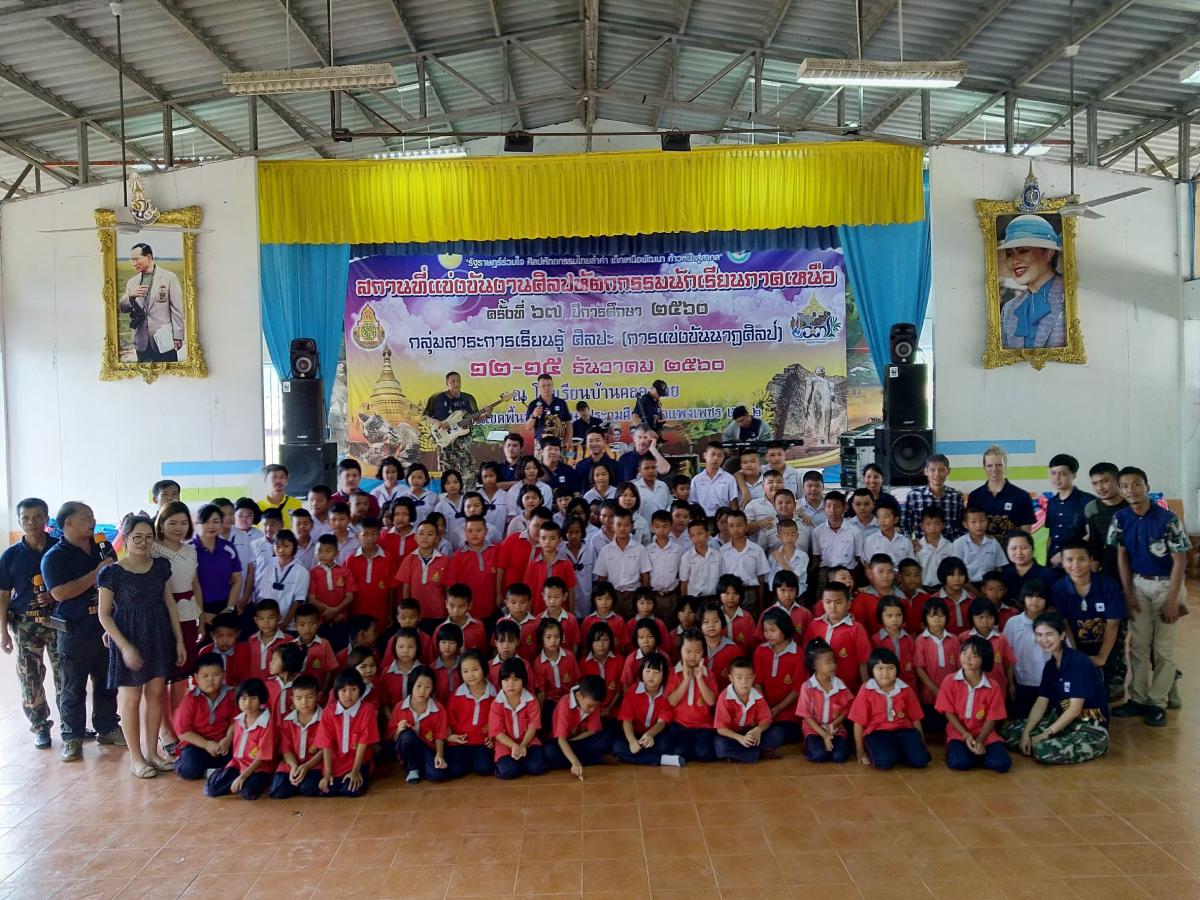 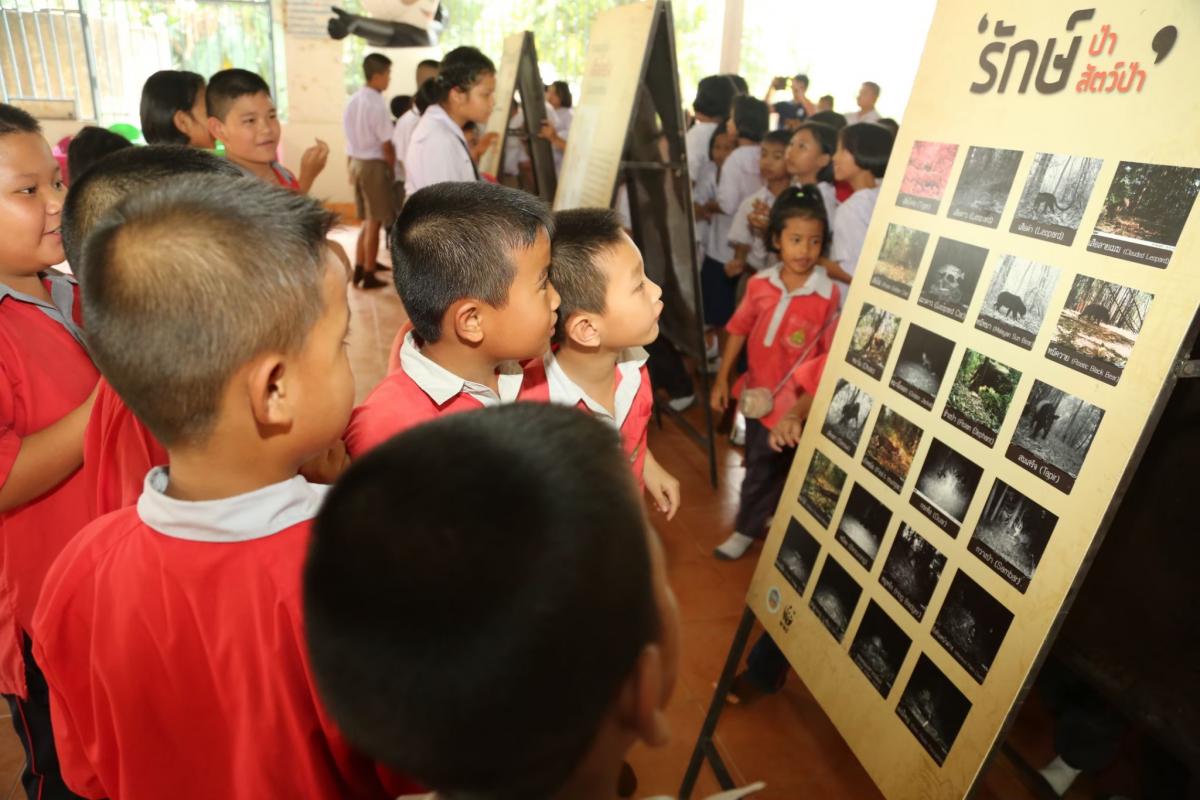 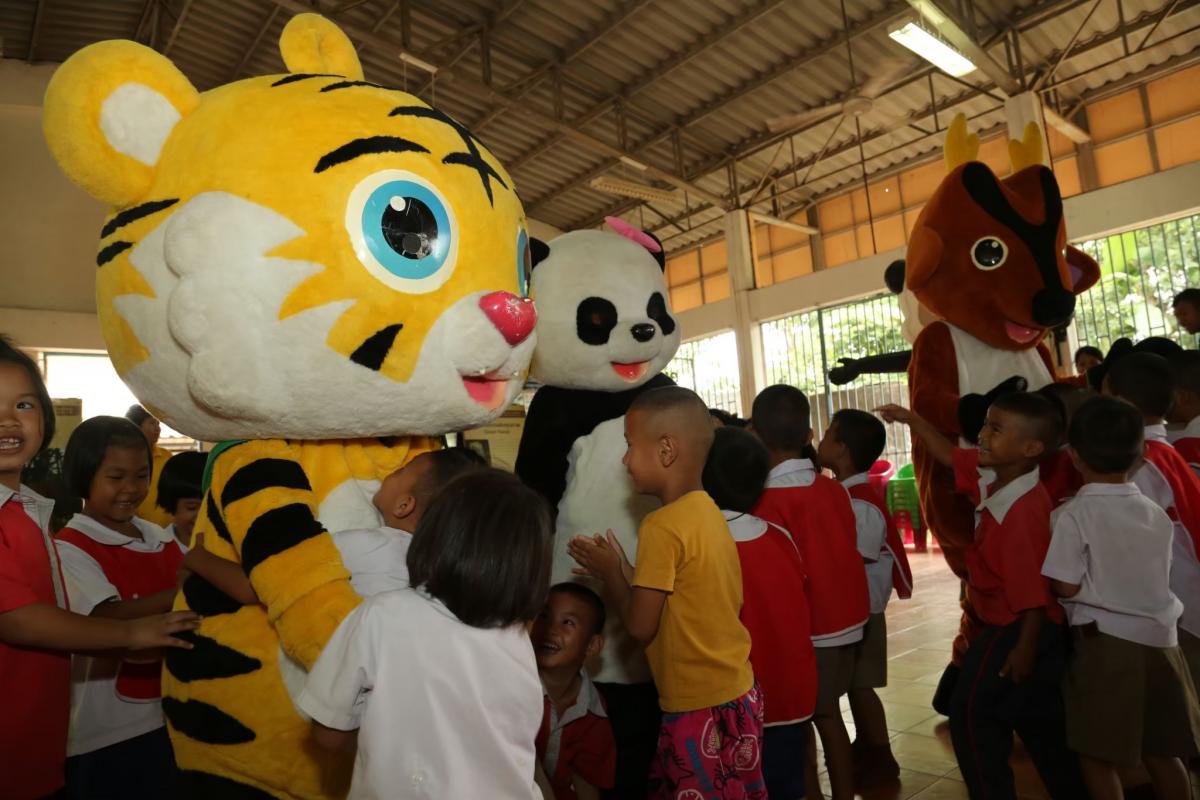 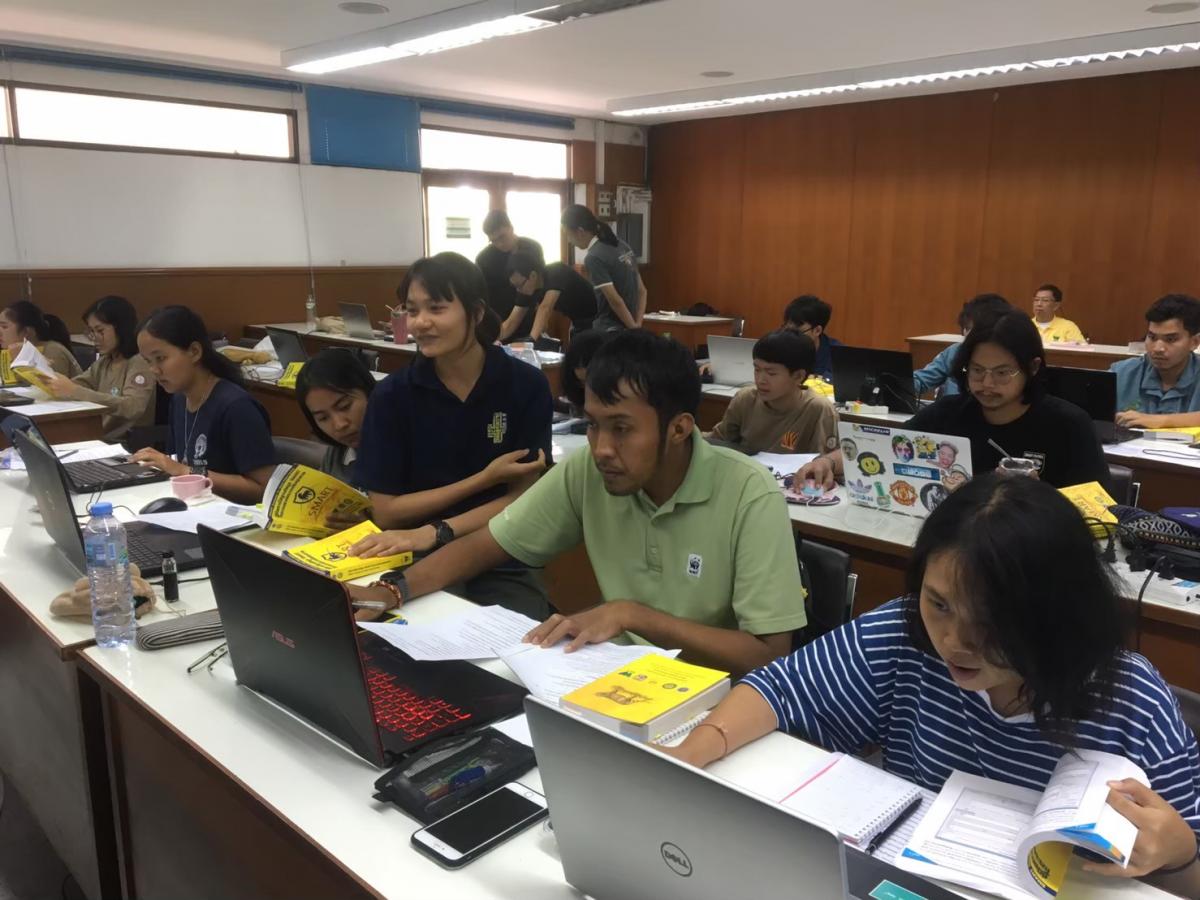 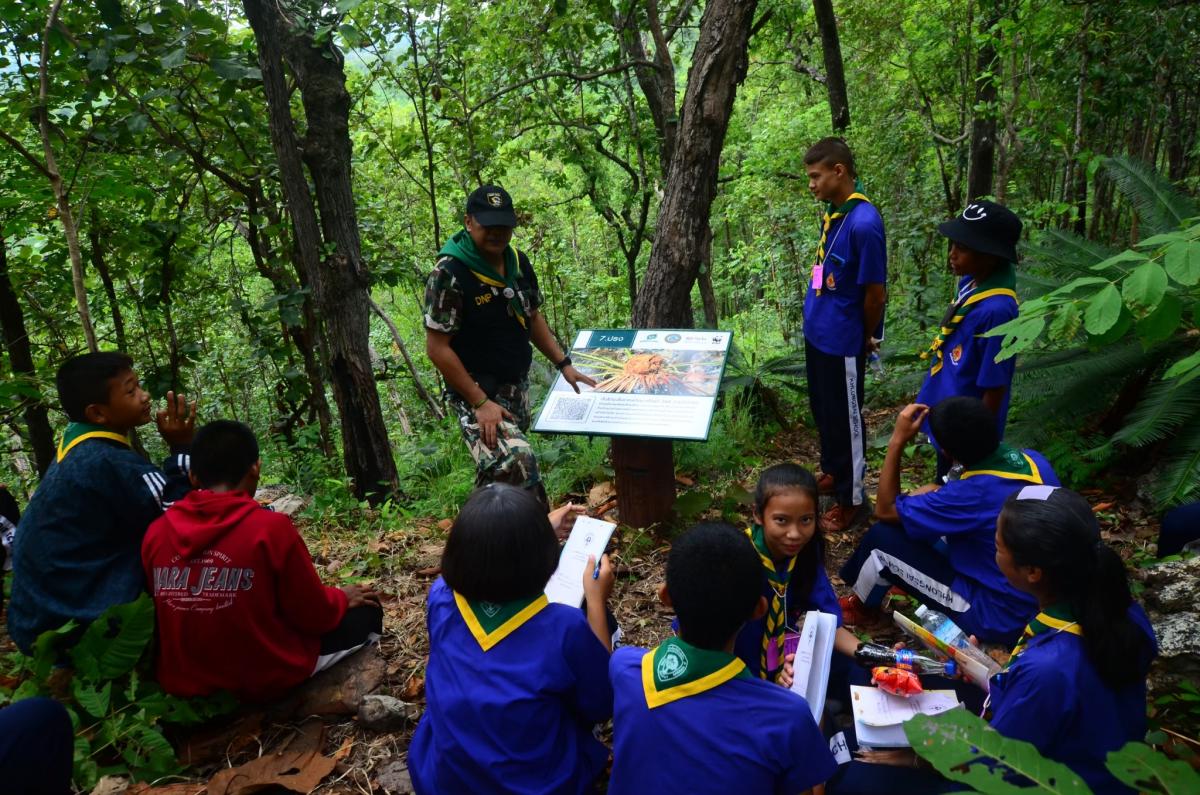 In order to provide an even better support to the rangers’ work in the coming years and to enable the best possible alignment and cooperation of all ranger teams, a SMART patrol center was established in Mae Wong. The center offers 4 rooms with space for 30 rangers and is supplied with large maps and technical equipment. 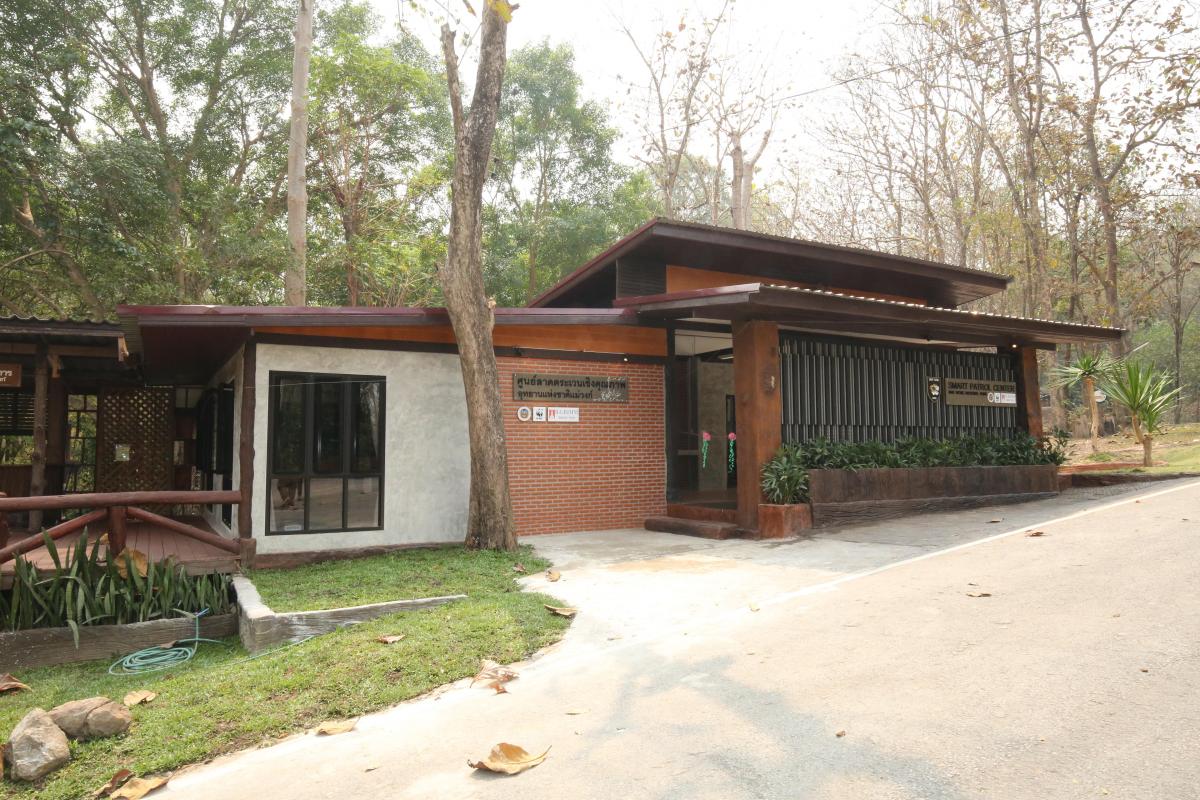 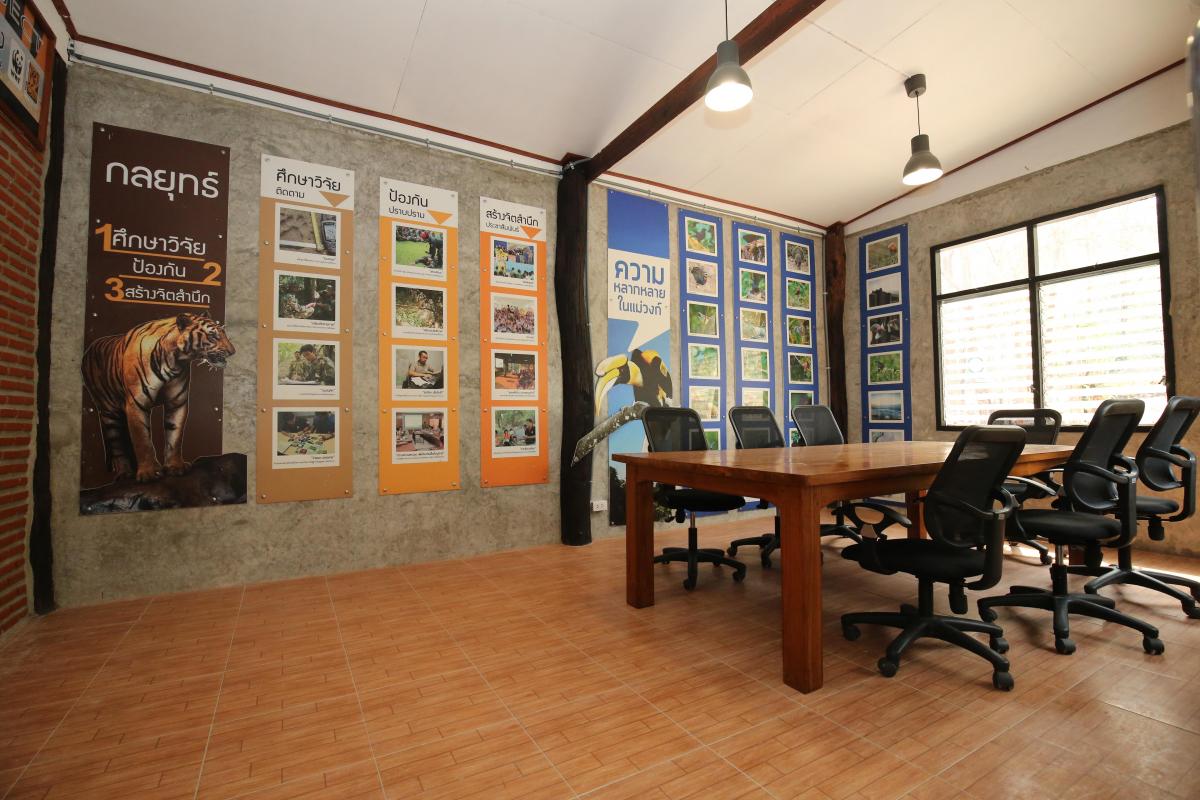 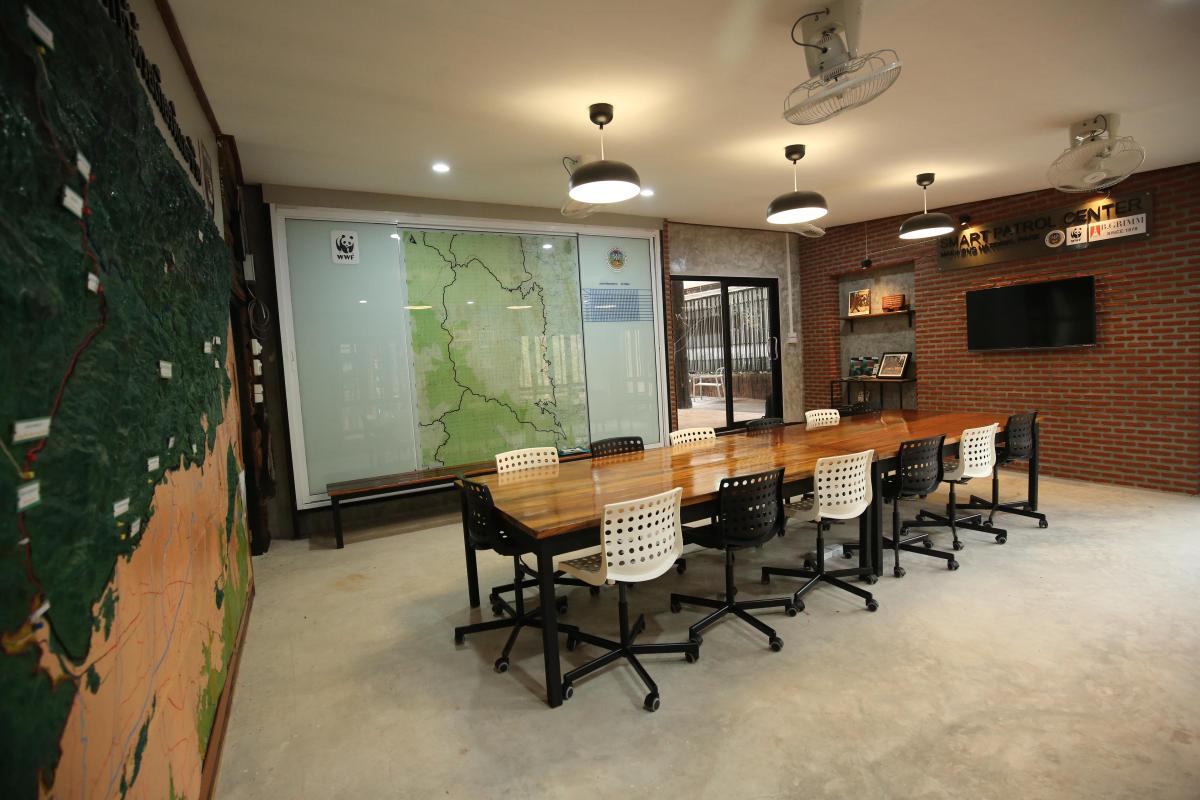 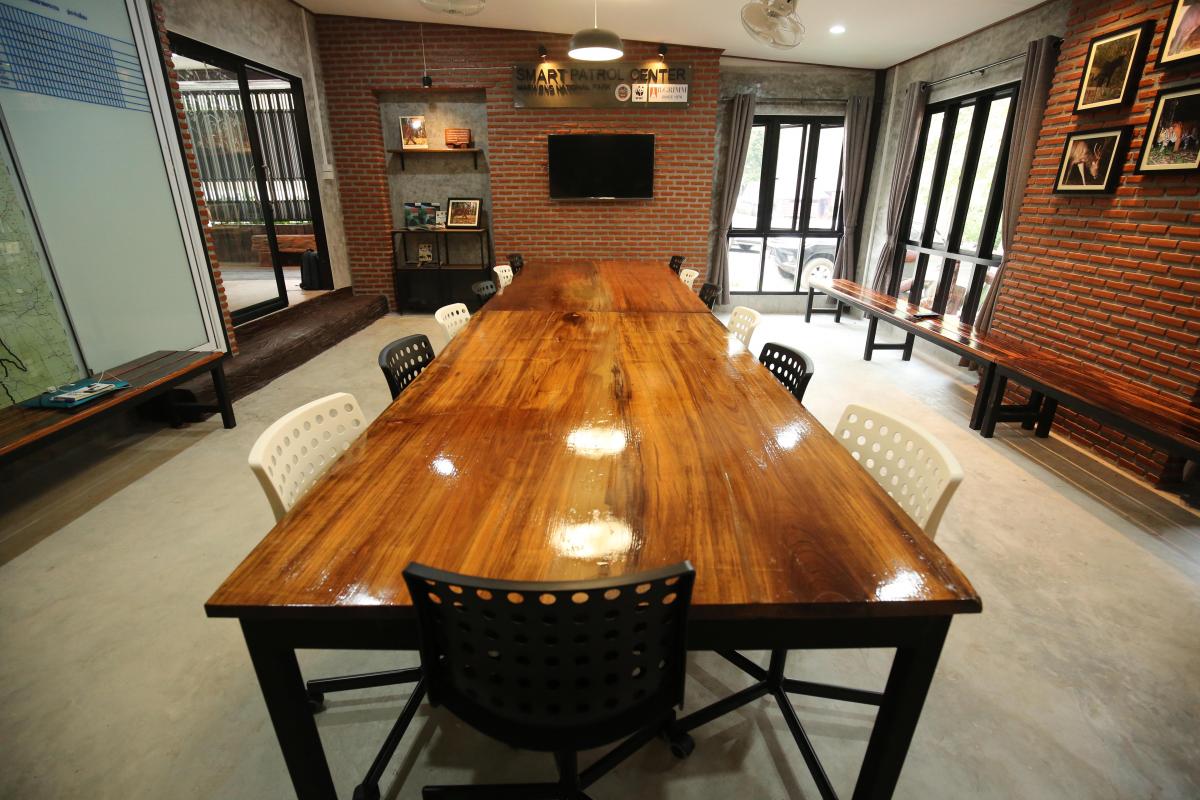 Adult animals live in their own territories, with size relative to prey availability and varying from 20 km² (8 mi²) to 450 km² (170 mi²). With an increasing number of tigers n Mae Wong and Khlong Lan, tigers wander into the bordering regions to seek their own territory. Umphang, a natural preserve with its 2,590 km² (1,000 mi²) plays a major role in our project region, not only because it borders Mae Wong and Khlong Lan and offers new territory for young animals, but also because it offers a connection, a so-called corridor to tiger regions in Myanmar. Such corridors are important enablers for tigers to roam and hunt and to provide for genetic exchange between the animals. Above all the preserve’s South and East offer ideal conditions for tiger habitat.

In addition to protecting tigers in our traditional project areas, and measures to increase prey density, the third priority this year was therefore to establish the same infrastructure in Umphang already available in Mae Wong and Khlong Lan.

In the past several months, 105 rangers have been trained and equipped with essentials such as uniforms, backpacks, GPS trackers and cameras. With this training and equipment they were able to begin their work in Umphang. Additionally, 17 simple ranger stations were established.

The work of the rangers is complicated primarily by the fact that with 22 villages and approximately 12,000 locals in Umphang, the relatively dense population in some areas exerts significant pressure on endangered species and natural resources. Since many locals don’t speak Thai, awareness campaigns in the villages and collaboration with locals are another challenge.

On their patrols during the past months, rangers have located and destroyed more than 40 poacher camps and captured several poachers. These numbers demonstrate the still strong presence of illegal activity in Umphang. An estimated 5 years are required to achieve a level of environmental and species protection in Umphang similar to that of Mae Wong and Khlong Lan. Nevertheless, a solid basis for work for the rangers has been established on which we can build in the coming year. 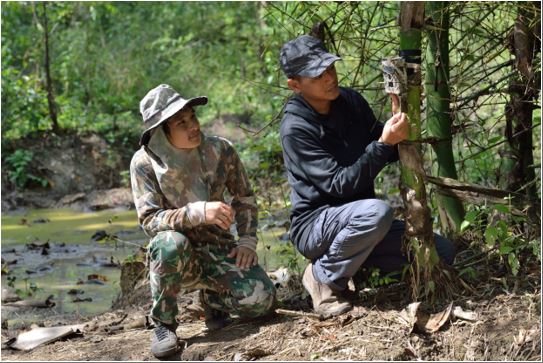 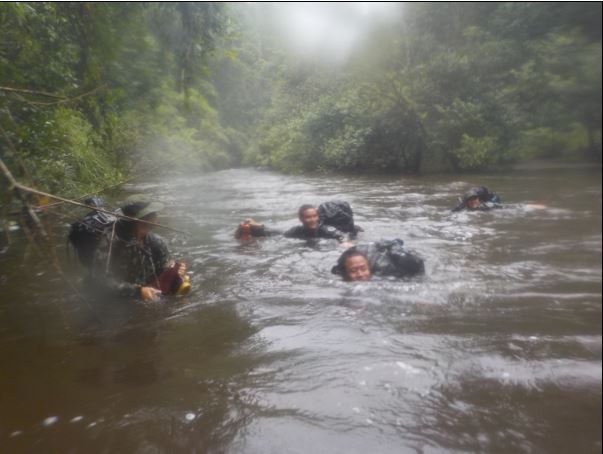 Rangers in Umphang:  setting of camera traps (left) and on patrol (right). 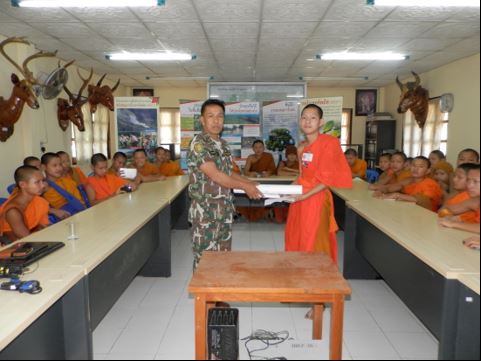 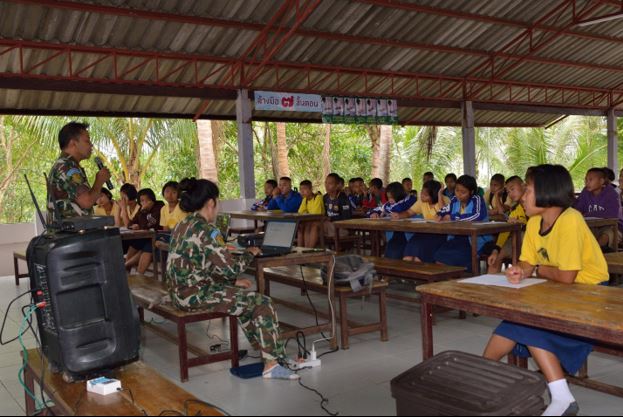 Information campaigns with young monks (left) and in schools (right). 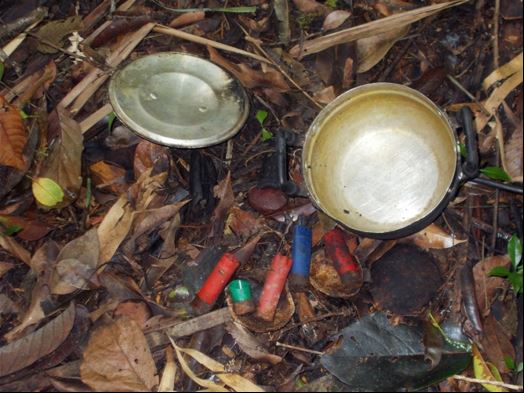 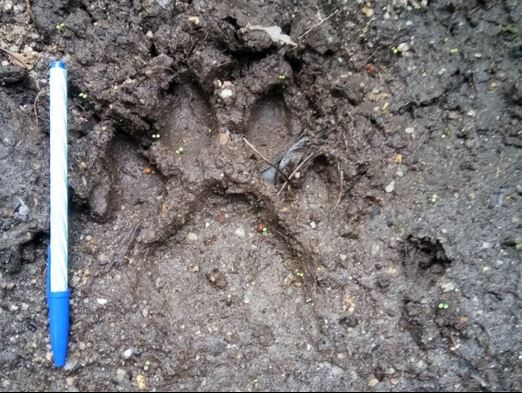 Much has been achieved in 2019 and tiger protection in Mae Wong, Khlong Lan and now also in Umphang has made good progress. At this point and also in the name of the rangers, we would like to heartfully thank all our loyal supporters that you have made protecting tigers real! Only you can make these successes possible! With your help we were able to support the projects releasing sambar deer and to cofinance the training and equipping of rangers in the new protected area Umphang.